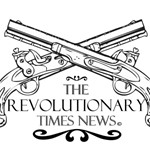 Published in The Revolutionary Times News on 5-12-2022

The LGBTQ+ Baal Peor religious community, hereinafter “Worshippers” have reenforced their war declaration upon the civilian inhabitant populace with a tweet by war criminal Lori Lightfoot, hereinafter “War Criminal Lightfoot”. The war declaration was first published by the Baal Peor religious community wherein the San Fransisco Gay Men’s Choir, hereinafter “SFGMC”, circulated a song about corrupting children LINK warranting a public hearing within the War Crimes Tribunal, hereinafter “WCT”. The Respondents of the SFGMC were found guilty of war crimes on (September 23rd, 2021) and ordered to exile the metes and bounds and seaward boundaries of The United States of America LINK.

War Criminal Lightfoot was found guilty of war crimes by the WCT for charges including, but not limited to, violating Article 1 of the Nuremberg Code, Communism, and International Terrorism LINK for advocating the New World Order agenda as inscribed on the Georgia Guidestones LINK and ordered to exile from the metes and bounds and seaward boundaries of The United States of America. Instead, War Criminal Lightfoot has gone against the Judgment and Order and now declared further war for the Worshippers calling said community to arms evidenced herein; 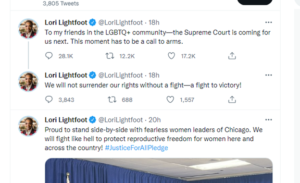 Those persons operating within the United States Federal corporation, hereinafter “USF”, have resorted to confusing the civilian inhabitant populace with gender issues that had Supreme Court Justice nominee Ketanji Brown Jackson unable to answer the question of how to define a woman, that such identification is an issue for biologists LINK. The Worshippers have been declared mentally defective by the National assembly for the Government of The United States of America LINK for corrupting children with gender confusion and genocide of unborn children vacant the understanding to identify the sex of persons wanting an abortion. Gender fluidity has been advocated for by the Worshippers and is further evidence of this double-minded agenda LINK.

This double-minded agenda is further weakening the state and populace within the USF without an established religion and a violation of the codified Law of Nations Book I Of Nations Considered in Themselves Chapter XII Of Piety and Religion § 134. Objects of his care, and the means he ought to employ and the judicial body politic of the USF has no real authority to administer justice being vacant a social compact by and between a permanent population to administer justice in accordance with Yahweh, God of Abraham, Isaac, and Jacob, hereinafter “Yahweh” evidenced in Romans 3:19-20 stated herein;

“19 Now we know that whatever the law says it speaks to those who are under the law, so that every mouth may be stopped, and the whole world may be held accountable to God. 20 For by works of the law no human being will be justified in his sight, since through the law comes knowledge of sin.”

We are all born into sin and need to confess our sins to Yahushua (Jesus Christ), our Lord and Savior, to enter the strait gate, walking the narrow way in accordance with Yahweh, accepting the established religion thereof.

The codified Law of Nations states that a Nation is obligated to  establish a religion, therefore the permanent population of American Nationals and declared residents of The United States of America has accepted and acknowledged the established religion of “followers of the Way, the Truth and the Life” evidenced in Article 3 of the Bilateral Social Compact Agreement LINK by and between the permanent population of the States of the Union of The United States of America under the political authority of said population of the Nation as first among equals in a state of nature. The words of Yahweh address the double-minded agenda by War Criminal Lightfoot and the Worshippers in 1 Timothy 1:8-11, therefore addressing the necessity of an established religion in accordance with Yahweh among those persons in rebellion of the doctrine, stated herein;

“8 Now we know that the law is good, if one uses it lawfully, 9 understanding this, that the law is not laid down for the just but for the lawless and disobedient, for the ungodly and sinners, for the unholy and profane, for those who strike their fathers and mothers, for murderers, 10 the sexually immoral, men who practice homosexuality, enslavers, liars, perjurers, and whatever else is contrary to sound doctrine, 11 in accordance with the gospel of the glory of the blessed God with which I have been entrusted.”

Yahweh begot his only son Yahushua (Jesus Christ) to become the perfect sacrifice for the sins of man so they may find salvation through him and be given eternal life by Yahweh. All else is rebellion against Yahweh and subject to eternal ruination and burning within the Lake of Fire. Without an established religion in social compact agreement the members of the executive, legislative, and the judicial body politics of the foreign political subdivisions, the paper states within the USF are rebelling against Yahweh and unjustified as stated within Galatians 3:10-14 stated herein;

“10 But as many as are doing works outside of the Law are under the curse. For this is written:  Cursed is everyone who does not continue in all things which are written in The Book of The Law, to do them. 11 That no man being outside the Law is justified before Yahweh, that is evident, for The just will live by the faith— 12 And the Law is not contrary to the faith, for The man who does these things will live by them. 13 Messiah has redeemed us from the curse of the Law by becoming a curse for us, for it is written: Cursed is everyone who hangs on a tree. 14 He redeemed us in order that the blessing given to Abraham might come to the Gentiles through Yahshua Messiah, so that by the faith, we might receive the promise of the Spirit.”

The continued declarations of war against Yahweh by War Criminal Lightfoot and Worshippers are declarations that shall seal the judgment against the aforementioned for advocating genocide of Yahweh’s children created through His spark of life. The office of the Special Prosecutor shall utilize this International Publication as evidence within the WCT for the nefarious actions by War Criminal and the Worshippers.