What does this mean for every Bar member conducting legal proceedings within the United States corporation? Treason- a Capital crime, with a possible punishment of death. For instance, in the parent corporation of Florida the 1868 Constitution was revised in 1968 passed by the electorate in referendum, or by a direct vote by only the electorate. As the parent corporation of Florida has no permanent population, the parent corporation of Florida members passed their own policies and the policies of the Inns of Court of the Masonic City wherein the corporate State’s Judicial Department changed to a Judiciary that requires members of the bar of Florida evidenced in Article V of said Constitution LINK. Such acts are considered usurpation and Treason committed upon the original State Constitution prior to its territory arbitrarily placed within the Washington D.C. corporate municipality via the District of Columbia Act of 1871 LINK and has gone without accountability for too long. The T-Roh Show is now covering the agenda in a short series pertaining to the Three City State Empire wherein Part 1 is provided here; LINK.

Both the King of Great Britain and the Crown of Great Britain known as the Lord Mayor of Masonic City, separate entities, were mentioned in the oath of allegiance for the free and independent State of Pennsylvania evidenced below, yet even the affirmation and oath for members of Congress in 1778 did not mention the Crown LINK, evidence that the members of Congress were not and still are not renouncing the Crown. 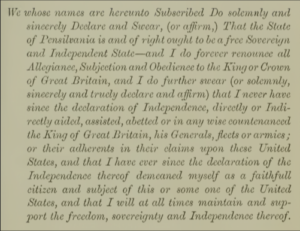 More disturbing is the fact that the U.S. Dollar currency in the United States corporation is merely Fiat currency (no value or substance) owned by the private banking institution known as Bank of England owned by the Rothschild family located within the metes and bounds of Masonic City whereas said currency is used as the United States corporation is bankrupt and indebted to Bank of England through credit LINK (Section 43 (b)(1)). Said currency even depicts the symbolism of the Masonic Order on the One (1) Dollar Bill with the pyramid and all-seeing eye of Horus (Nimrod) LINK. The Bar members operating in the corporate Commonwealths, States, and the United States corporation itself are creating bonds to issue this Fiat currency associated with the Masonic City utilizing inhabitants PERSONS as collateral LINK, thereby committing Slavery upon each inhabitant through the Internal Revenue Trust by way of ordinances, statutes, policies, etc.

With the Masonic Order rooted into the Masonic City it can only be concluded that all persons as members of the foreign political subdivisions, corporate Commonwealths and States, and the United States corporation itself are all members of the satanic masonic Order rebelling against Yahweh the God of Abraham, Isaac, and Jacob by arbitrarily taking ownership over Yahushua (Jesus Christ) claim. May all Occultists as Bar members repent in accordance with the Gospel of Yahushua (Jesus Christ) for a day that has been fixed in accordance with Acts 17:30-31 stated herein;

Previous post NOTICE OF LIABILITY FOR ALL MEMBERS OF THE CORPORATE NEW YORK STATE ASSEMBLY IN THE MATTER OF ASSEMBLY BILL A9963!
Next post AFFIDAVIT OF FACT BY Jenna Lea Anderson, Trustee!