Published in The Revolutionary Times News on 5-9-2022

United States, in Congress assembled by the American Nationals for the Government of The United States of America hereby notifies all members of the U.S. Congress of potential war crimes for trespassing upon a foreign social compact agreement established by the permanent population of the country by attempting to codify abortion in the 1973 Roe v. Wade decision with House and Senate bills H.R. 3755 LINK and S. 1975 LINK.  The aforementioned bills are an attempt to enact policies to legalize genocide of unborn children, thereby attempting to establish a religion under Molech in violation of the public religion known as the “followers of the Way, the Truth and the Life” established in accordance with International Law and published within Article 3 of the Bilateral Social Compact Agreement by and between the permanent population of the States of the Union of The United States of America. The amended Social Compact LINK is published in accordance with the Law of Nations, codified as International Law since 1758. It is hereby noted that child sacrifice rituals to false pagan gods in rebellion against Father Yahweh, God of Abraham, Isaac, and Jacob have been witnessed throughout history, and the U.S. Congress is liable for attempting to legislate acts of genocide against the population of the country.

“31 And they have built the high place of Tophet; Contempt, which is in the Valley of Ben-Hinnom; Son of Hinnom, to burn their sons and their daughters in the fire to Molech—which I have never commanded, nor did such a thing ever enter My mind!”

A February 2022 leaked draft document by Judge Alito detailing the opinion from the Supreme Court in the matter of abortion from the controversial 1973 Roe v. Wade ruling LINK that has caused considerable uproar for those persons advocating for child sacrifice wherein it would seem the Supreme Court Justices will overturn said ruling, evidenced below, prompting the U.S. Congress to codify said ruling LINK, thereby supporting the established religion of Molech, a form of Satanism as any established religion not in accordance with Father Yahweh, God of Abraham, Isaac, and Jacob, is Satanism. 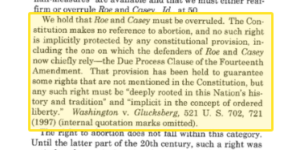 If one pays careful attention to capitalization, one will better understand the differences between state and State, evidenced in the excerpt below wherein the lower case “s” state references foreign political subdivisions using state policies and “courts” of the unoccupied United States of America and the upper case “S” State references Parent Corporations of the United States Federal corporation, hereinafter “USF”, that are hijacking the original State names according to the State Constitutions, wherein the members of the U.S. Congress operate, witnessed on Dun & Bradstreet LINK (State of California), LINK (State of Illinois), and LINK (State of Maryland);

“Until the latter part of the 20th century, there was no support in American law for a constitutional right to obtain an abortion. Zero. None. No state constitutional provision had recognized such a right. Until a few years before Roe was handed down, no federal or state court had recognized such a right. Nor had any scholarly treatise of which we are aware. And although law review articles are not reticent about advocating new rights, the earliest article proposing a constitutional right to abortion that has come to our attention was published only a few years before Roe.

Not only was there no support for such a constitutional right until shortly before Roe, but abortion had long been a crime in every single State. At common law, abortion was criminal in at least some stages of pregnancy and was regarded as unlawful and could have very serious consequences at all stages. American law followed the common law until a wave of statutory restrictions in the 1800s expanded criminal liability for abortions. By the time of the adoption of the Fourteenth Amendment, three-quarters of the States had made abortion a crime at any stage of pregnancy, and the remaining States would soon follow.”

Now that Supreme Court Justice Alito provides evidence that the U.S. Congress is operating within corporations, the USF evidenced in 28 U.S.C. 3002 (15)(A) LINK, does not recognize an established religion evidenced in the First Amendment of the USF Constitution, therefore weaking the state and violating its own Constitution evidenced in Article 1 Section 8 Clause 10 LINK, for failing to punish felonies against the Law of Nations, including but not limited to failing to establish a public religion for the Nation. However, the double minded members of the U.S. Congress have enacted policies protecting members of the Baal Peor religious community LINK and recognized The Satanic Temple as a religion LINK. These acts of promoting equality and diversity among the civilian inhabitant populace further divide and weaken the society evidenced in the codified Law of Nations Book I Of Nations Considered in Themselves Chapter XII Of Piety and Religion § 134. Objects of his care, and the means he ought to employ wherein it states;

“The creeds or opinions of individuals, their sentiments with respect to the Deity, — in a word, interior religion — should, like piety, be the object of the prince’s attention: he should neglect no means of enabling his subjects to discover the truth, and of inspiring them with good sentiments; but he should employ for this purpose only mild and paternal methods.5 Here he cannot command (§ 128). It is in external religion and its public exercise that his authority may be employed. His task is to preserve it, and to prevent the disorders and troubles it may occasion. To preserve religion, he ought to maintain it in the purity of its institution, to take care that it be faithfully observed in all its public acts and ceremonies, and punish those who dare to attack it openly. But he can require nothing by force except silence, and ought never to oblige any person to bear a part in external ceremonies: — by constraint, he would only produce disturbances or hypocrisy.

A diversity of opinions and worship has often produced disorders and fatal dissensions in a state: and for this reason, many will allow but one and the same religion. A prudent and equitable sovereign will, in particular conjunctures, see whether it be proper to tolerate or forbid the exercise of several different kinds of worship”

and are a violation of the codified Law of Nations Book I Of Nations Considered in Themselves Chapter XII Of Piety and Religion § 129. Public establishment of religion stated herein;

“But we should take care not to extend this liberty beyond its just bounds. In religious affairs a citizen has only a right to be free from compulsion, but can by no means claim that of openly doing what he pleases, without regard to the consequences it may produce on society.(52) The establishment of religion by law, and its public exercise, are matters of state, and are necessarily under the jurisdiction of the political authority. If all men are bound to serve God, the entire nation, in her national capacity is doubtless obliged to serve and honour him (Prelim. § 5), And as this important duty is to be discharged by the nation in whatever manner she judges best, — to the nation it belongs to determine what religion she will follow, and what public worship she thinks proper to establish.”

This Notice of Liability shall be utilized as evidence for proceedings within the War Crimes Tribunal for The United States of America against the members of the U.S. Congress and the office of the Special Prosecutor for the War Crimes Tribunal shall await the determination from the Marshall of the Court’s findings in the matter of Breach of Trust.