Published in The Revolutionary Times News on 2-11-2022

“The proliferation of false or misleading narratives, which sow discord or undermine public trust in U.S. government institutions.”

The National assembly for the Government of The United States of America hereby accuses the persons in and for the Department of Homeland Security of spreading misinformation as the United States Federal corporation cannot have government institutions being vacant a legally written and published social compact agreement from the permanent population of the country to accept and acknowledge a specific form of Government in accordance with customary international law and the Law of Nations.

As has been evidenced in past publications LINK a true sovereign State or Nation would not be listed in a Dun & Bradstreet business directory, therefore the United States Federal corporation or any variation of the name is not a true sovereign government evidenced below; 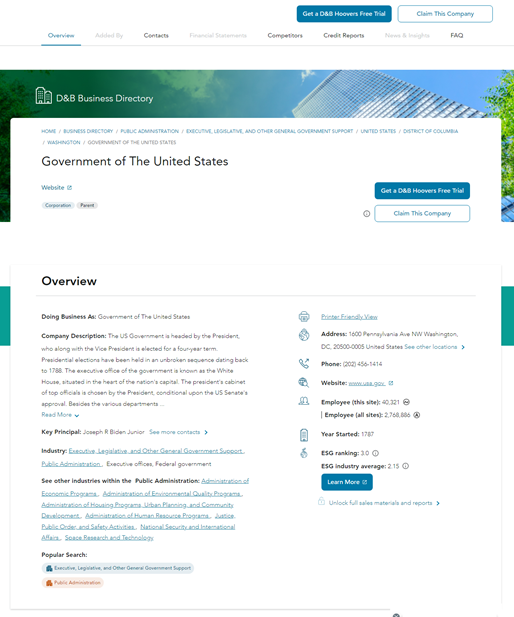 It is evidenced that according to the Dun & Bradstreet directory, the Government of The United States, the Parent Corporation was established in 1787 and the industry arbitrarily mentions only two (2) of the three (3) body politics of a Nation.

This International and National publication shall serve as evidence for Notice of Forced Deportation against any person caught aiding and abetting in the enforcement of the aforementioned terrorist advisory for violations including, but not limited to, spreading communist propaganda for the express purpose of creating fear and inciting violence amongst the civilian inhabitant populace, to justify authoritarian corporate policies, and will be deported in accordance with the Forced Deportation Act of 2021 LINK motioned and published by the National assembly for the Government of The United States of America on (August 17th, 2021). The Government of The United States of America will match salaries dollar for dollar with full title currency through the office of the Treasury for The United States of America.

Issued on this the 329th day in the year of Yahweh, 6023 , translation 11th day of February in the two thousand and twenty second year of the new covenant in Yahushua’s name.

office of president for The United States of America