Published in The Revolutionary Times News on 5-27-2022

The satanic Theosophical Society is hereby outlawed by the National assembly for the Government of The United States of America as of (May 16th, 2022). The said Society stems back to the 3rd Century and is a continuation of Esoteric ideology rooted from the Greek word esoterikos “belonging to an inner circle” (Lucian) LINK practiced by early biblical entities such as Solomon and Nimrod whose all-seeing eye is displayed in the satanic Freemasonry secret Society and displayed on the United States One Dollar FIAT currency.

The members of the satanic Theosophical Society, from the Greek theosophia, which is composed of two words: theos (“god,” “gods,” or “divine”) and sophia (“wisdom”) LINK, were instrumental in the forming of the satanic United Nations LINK utilizing the ideology that all members must join in the effort for a Universal Brotherhood of Humanity. Said Society has combined multiple pagan religions together as the symbol for the Theosophical Society evidenced herein LINK and below. 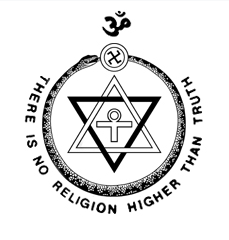 The perpetrators of this conspiracy LINK to conquer America through paganism by a One World Government is hereby objected to and is made known to the world that advocating for said conspiracy is a violation of the codified Law of Nations Book I Of Nations Considered in Themselves Chapter XII Of Piety and Religion. The established religion of the nation of The United States of America is “followers of the Way, the Truth and the Life” evidenced in Article 3 of the Bilateral Social Compact Agreement by and between the permanent population of the States of the Union of The United States of America LINK.

Said perpetrators have socially engineered the populace into paganism thereby rebelling against Yahweh, God of Abraham, Isaac, and Jacob, hereinafter “Yahweh”,  in the early stages of development through image training, promoting, and advocating for community authority figures to replace the parents thereof, such as teachers, law enforcement officers, judges, and pagan magical holiday figures such as the Easter Bunny and Santa Claus.

Complete compliance by said authority figures is evidenced in the conflicting events that unfolded at Robb Elementary School in Uvalde within the foreign political subdivision of Texas wherein registered agents (law enforcement) controlled the parents of attending students to refrain from action while permitting the gunman to commit nefarious actions by shooting school children and staff for approximately an hour LINK leading to several unnecessary deaths for the lack of action by said registered agents. In catholic churches, Yahushua (Jesus Christ), hereinafter “Yahushua”, is displayed hanging as a reminder to instill fear of the persecution and pain that will be administered upon those persons that advocate for the Way, the Truth and the Life in accordance with Yahushua’s Two (2) commandments evidenced in Mattithyahu (Matthew) 22:37-39 stated herein;

By taking Yahweh out of the Hierarchy, said perpetrators of the satanic world system have socially engineered the populace to take the status of Beneficiary, or the consumer, and arbitrarily replaced the privacy of each with public privileges and benefits, as opposed to private obligations and rights by those persons living in accordance with Yahushua’s Two (2) commandments. Instilling fear upon the populace by said perpetrators as part of the Hegelian Dialectic LINK to convert said populace to new standards and lifestyles has been an ongoing agenda evidenced in the alleged 9/11 attack evidenced herein; LINK and LINK.

All other religions that promote the ideologies of false pagan gods are rebellion against Yahweh. Yahushua’s house is now being put in order for his return. May the members of the satanic Theosophical Society repent in accordance with the Gospel of Yahushua for a day that has been fixed in accordance with Acts 17:30-31 stated herein;

Previous post OBJECTION TO ALL GLOBAL PANDEMICS PROPOSED BY THE WORLD HEALTH ORGANIZATION!